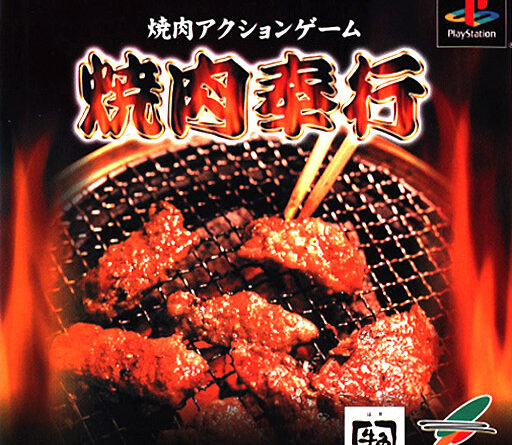 Yakiniku Bugyou is a Japanese cooking game that was originally sponsored by a Japanese grill restaurant known as Gyu-Kaku and released on the PS1. Now it’s available as an import on PSN for play on either the PS3 or the PSP.

It’s a rather simple game conceptually, but the challenge lies in the timing required to satisfy your virtual customers. But is this enough to make a solid game, and not come off as a blatant advertisement game reminiscent of Yo! Noid?

Yakiniku Bugyou has several modes: Single-Player, Two-Player, and Endless Mode. Single-Player has three difficulties, the easiest of which includes a tutorial that explains how to play the game. Unfortunately, as I don’t have any real knowledge of Japanese, this tutorial was useless to me. When the gameplay first starts, three portraits appear at the top of the screen with two food items next to each, boxed in green and red. These are your customers, and the food item in green is their current like, while the item in red is their current dislike. Below the portraits is a satisfaction bar, and in the beginning, most customers start with their bar half-filled. Later levels
and higher difficulties will start the bar below the
half-way mark.

The objective of the game is to fill the customers’ satisfaction bars as high as possible and keep them there for the duration of the level, which lasts 99 seconds. If a customer’s bar completely depletes, the level ends immediately. If the level finishes with even a single customer below their half-way mark, you have to repeat the level. However, if you do well enough to keep customers’ satisfaction bars maxed at the end of a level, you receive a point bonus.

Keeping your customers’ satisfaction bars filled is easier said than done. You do this by cooking food (mostly meat) and feeding it to them. However, each customer has their own preferences for how long they like their food cooked. In addition to this, it behooves the player to try to feed the customers the food displayed as their like because this will boost their satisfaction bar by more than the usual amount. However, if you accidentally feed them their dislike, or if a food you feed them is too overcooked or undercooked, their satisfaction will decrease. This is important because a couple mistakes can cost you the level.

The food you can place on the grill is displayed on the left, with a queue of the next two food items visible at all times. The food in the queue is completely random, and this can cause a problem depending on your customer’s current dislikes. A very good example of this is the “final boss” for the Single-Player mode: In the last level, you face what I can only assume is a yakiniku master. He is your only customer, starts off with a satisfaction bar that’s about 1/4th full, and is more fickle than a high school cheerleader. Because of his changing likes and dislikes, you will often have half of the grill filled with food you can’t feed him. This ends with the food becoming charred and stuck to the grill, which leaves you with less space to work with. However, if you pick the food off the grill the satisfaction bars of your customers will all decrease. After a few playthroughs, I found the best method for winning against the master is to place everything on the grill, feed him whatever you can, and ignore pieces that end up charred.

Figuring out this strategy gave me a sense of accomplishment; however, after this point the game was becoming much less of a challenge to play. Most of the difficulty in this game lies in the random foods, satisfaction bars starting low, and not knowing when to flip a piece of food. One of the major criticisms I have is how hard it is to tell when some of the foods are ready to be flipped. For some of the meats the only indication is a slight change in hue. This can become an issue when you’re busy concentrating something else on the screen; if you don’t notice the color change, you might not remember that the color was ever so slightly different. I had this issue a lot when I first began playing the game, but afterwards, I began to make sure to not keep my eyes off those meats when they were on the grill.

One of the things that expounded this problem was the difference in cooking times. Some foods cook very quickly, but some — notably the non-meats — take much longer. Most of the non-meats had little indication to tell you they were ready to flip, and since they take the longest to cook, you have to bring your attention elsewhere — which usually results in overcooking them.

Endless mode had most of the same quirks and gameplay as Single-Player; the only difference is that customers are replaced when they reach full satisfaction. A counter on the side of the screen shows how many customers have left your shop fully satisfied. On the difficulty level I played this on, most of the customers started with low satisfaction levels, and it was very hard to achieve a good turnover rate.

Overall, the game is decent. The biggest issue with the game is the aforementioned problem with indication that a food should be flipped. The game gives scores based on how well you did in each level and grades you at the end of the Single-Player mode. This provides a gauge for you to measure yourself against if you like to replay games to beat your high score. The game strikes me as a solid Arcade-style console game, and although that’s not my favorite genre, I can see a definite appeal to some. The game is $5.99 and may or may not be worth it if you just want a game you can sit down and play occasionally without having to worry about backgrounds, previous progress, or strategy guides. $5.99 seems a little pricey for a game like this, especially since I can buy similar games for my phone for about 2 or 3 dollars cheaper, but it’s not completely unreasonable. At the end of the day, I certainly did have fun playing this game.

Cons
*Hard to tell when to flip foods sometimes
*No unlockables or any other incentives for replay outside of score
*$5.99 may be a tad high

Disclosure: This game was given to the writer by Monkey Paw for review purposes.  At the time of the review’s completion, the writer had finished the Easy and Medium difficulties in Single-Player mode and had gone about 3 rounds into Endless mode.